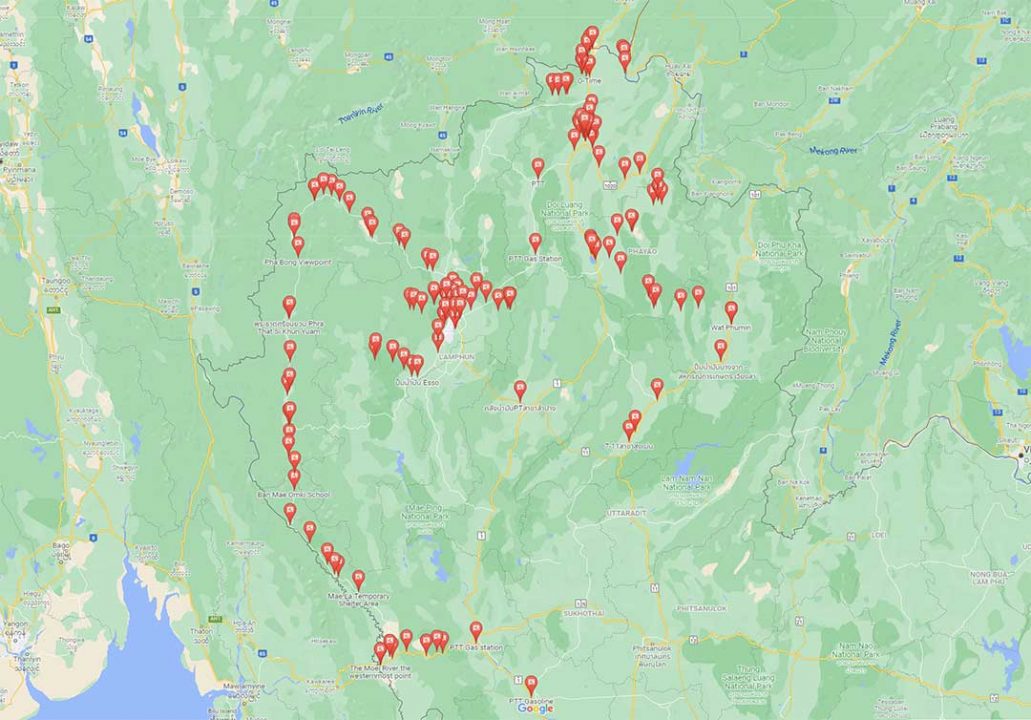 Phuket – Bangkok, what to expect on the road.

My trip to the Golden Triangle started on the 11th December 2021; at that time, I had been locked up in Phuket for almost 2 years due to COVID.

Of course, I know there could be much worse places to be locked up than Phuket. I also know that I am fortunate, and many people have suffered much more than me during the COVID crisis.

To be honest, I haven’t suffered at all. The only thing I missed was my road trips around Thailand.

I usually go on three to four longer road trips every year, so two years without, was a long time to be confined to one place, even though Phuket is paradise to me.

But my trip to northern Thailand and the Golden Triangle, got me back on the road, back to what really matters to me: traveling and exploring.

The Golden Triangle is where Thailand, Laos, and Myanmar meet. I have read somewhere it was the CIA that gave it its name because of the opium production, the triangle is known for.

I don’t understand why they called it the Golden Triangle, as poppies are more red than golden. But it may be that the CIA saw the area as a “golden” opportunity to make money from the heroin trade during the Vietnam War, but that’s another story.

I didn’t go to the Golden Triangle to check out the opium trade. But since I was there, and it’s one of the things the area is known for, I checked a few places and stories anyway, but more about that later.

The Golden Triangle has many other exciting stories to tell and some of the most beautiful landscapes in Thailand to show. That was the very essence of my trip and what I will share.

My goal was to reach Bangkok on the first day and find a hotel just north of the city. I try to avoid driving through Bangkok in the morning as the traffic is always jammed, in the evening it’s not so bad.

The trip from Phuket to Bangkok is around 900 kilometers and usually takes 12-13 hours, depending on how many pit stops I make along the way.

Many will properly say that they can make the trip much faster, but I am not in a hurry; the goal is not the destination but the journey.

When I drive in Thailand, I usually go around 80 kilometers per hour. As I said, I am not in a hurry and like to take my time and enjoy the ride. To put it in a “New age” way, I practice mindful driving.

“Road rage” is common in the west; luckily, you don’t see it much in Thailand. When driving here, some of the most important rules are to show consideration, compassion, and being patient. And then follow all the normal traffic rules.

It’s all about being calm and patient. The greatest teachers I have in self-control are drivers who drive stupid.

Instead of getting angry and starting to yell, I relax and say to myself. Well, tomorrow I’ll be the one doing something stupid, and the other drivers will forgive me.

I know from experience that Thai drivers are very forgiving. In Thailand, you can drive in a way that is a total no-go in most other countries.

Like, if you find yourself in the wrong lane, you can easily cross 7 lanes in traffic-jammed Bangkok, in only 50 meters without anybody using the horn.

Everybody just let you cross in front of them, while they probably are thinking; “It is ok, tomorrow it is me who drive stupid.”

To get from Phuket to the mainland and Phang Nga Province, you must cross the Sarasin bridge. The bridge itself is nothing special, but the view from the bridge is beautiful.

And especially on a day, filled with excitement, on my way to new adventures, it was stunning, so I stopped and shot a picture.

Once you have crossed the Sarasin Bridge and left Phuket, you will enter Phang Nga Province.

Phang Nga is known primarily for the many limestone cliffs dotting and decorating the landscape, making the drive through the province an extraordinary experience.

In the good old days, before global warming, some 2-300 million years ago, the province was covered with water and was 100 meters below sea level.

Back then, the rocks were not rocks, but corals, part of a coral reef that stretched from Singapore up to the southern coast of China.

Although you might not see the most beautiful landscapes and scenery on the trip from Phuket to Bangkok, once you leave Phang Nga province, there’s still plenty to see along the way.

You will meet many roadside vendors selling local products when you drive in Thailand. They are usually in clusters with many booths selling the same products. I am not sure if “boots” are the right word, they come in all kinds of shapes and sizes.

You will see everything from the very simple, umbrella and a table, to something that’s starting to look like an actual shop. They are lined up in long rows at the side of the road. The more popular the product, the longer the row.

It usually starts with someone who gets a good idea for something to sell, and opens a roadside “shop”. If the first vendor is successful, more will follow until the row stretches for hundreds of meters.

The first chain of roadside vendors you meet when you cross Sarasin bridge and leave Phuket sells all kinds of dried fisk and freshly boiled crabs.

They are also selling other things like pineapples and cold drinks. The place is famous among Thais who buy dried fish as souvenirs and gifts to bring home when they leave Phuket.

The next row you meet sells all kinds of handmade bamboo products and straw brooms. Usually, there are two rows of stalls, one on each side of the road, but they don’t necessarily have to be opposite each other.  They may be separated by a few kilometers, but you can be sure that what you can buy on one side of the road is also found on the other side.

When you get thirsty, don’t worry, there are also stalls selling ice-cold coconut water. They are easy to spot as they have both white coconuts and coconuts in bunches on display.

When you come to Chumphon, you also come to one of the most famous places, for bananas, all street vendors sell all kinds of banana products. Pretty much anything you can make from a banana you can get here.

There are probably more than a hundred stalls, all selling banana stuff.

I usually stop and buy deep-fried sliced bananas, it’s a healthy kind of snack, or so I try to tell myself. But they taste good.

The trip from the Bananas to Bangkok was easy, and I reached Bang Pa-In just north of Bangkok when it started to get dark.

When I need to find a place to stay, I always use Google Maps, so I stopped at a gas station and searched Google maps for motels in the area.

The closest was the Star Hotel. It is a motel that consists of two rows of bungalows, where you park between the cabins right outside the door.

It’s perfect for me as I always have the car filled with things I’m taking on the trip. The concept of “traveling light” I never really understood.

It may not be the most luxurious hotel you can think of but, when you only need to take a shower and sleep for a few hours, then the 400 THB it costs is excellent value.

Here is a link to the hotel: https://goo.gl/maps/GR4UfaHWdmzimbn46

I don’t get the commission, but since I use Google maps to keep track of where I’ve been, I think it is fun relevant to the story to share, a link to Google maps.

I woke up very early the following day. I was awakened many times during the night by the air con. It was set wrong, so it made a lot of noise when it started.

It was so noisy that I dreamt I was sleeping in a shed next to the runway at an airport. So when the plane took off again at 5 am, I woke up, and as the mattress was made of raw rubber and therefore very hard, I thought I might as well get up and drive on.

There was no point in setting the alarm clock to “snooze” and sleep for another 20 minutes.

The trip from Bangkok to Chiang Mai was also easy, there is not much to see, at least not if you take the fastest route.

I would not say boring, there is always something happening on the roads in Thailand, but I took the main highway, and not a more interesting longer route.

When I started driving around Thailand 30 years ago, finding clean toilets was often a problem. At that time, I ate very little when I was on tour. And to make sure I didn’t have to go to the toilet untimely, I always popped some Imodium. It is a medication used to treat diarrhea.

But fortunately, this is no longer necessary since PTT  filling stations have been established all over Thailand.

Besides having fuel, they also have clean toilets, a 7-11, and an Amazon coffee shop. It is really a thing for PTT to make sure that the toilets are clean. At one station I saw they had won the official PTT reward for the cleanest and nicest toilets.

I normally take a lot of pictures to share with my stories, but shooting pictures inside a toilet can easily be misunderstood, no matter how noble a reason you have, so you have to take my word for it.

You can also find restaurants and shops; the number and selection vary depending on the station’s size.

I arrived in Chiang Mai in the evening and stayed at Maejo Resort, a charming little resort just outside Chiang Mai.

The following day, I drove to Chiang Rai, where I would stay for a few days and explore the city and surrounding area. When I stay in a city for several days, I always spend more time finding a good place to stay than if I’m just staying overnight.

The first place I found was Imsuk Homestay, in the pictures looked really nice. It’s is several Thai-style wooden houses and are located in the middle of the rice fields, but it was only a one-night stand.

The problem was that there was too much space between the floor beams, so it had this wobbly feeling when you walked around inside the cabin.

It was a little like walking around a small wooden boat, and that the room was not very big only added to the feeling of being on a ship.

Very charming for one night, but I would use Chiang Mai as a base for the first part of my trip, so I had to find something less boat-like.

After all, I was on a road trip to the Golden Triangle, not on a river cruise down the Mekong River.