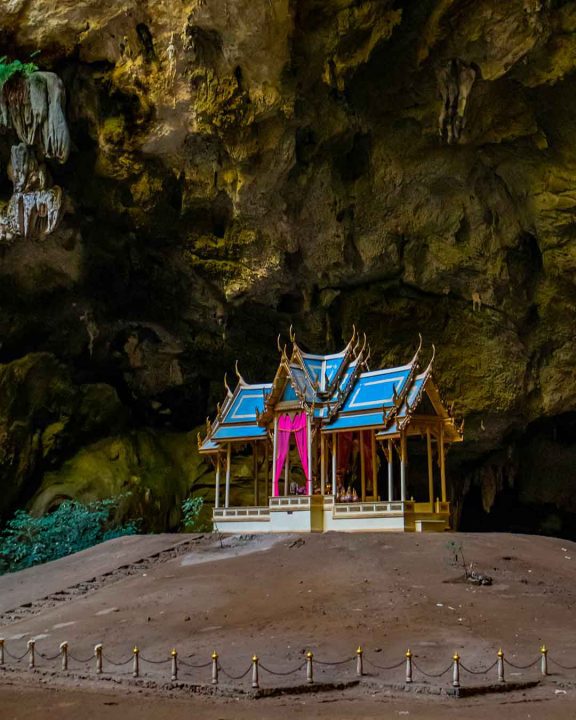 Phraya Nakhon Cave is considered the most exquisite cave in Thailand, and that is not without reason.

Even I had seen a lot of pictures of the cave and the temple inside it, it was still a breathtaking experience to visit the cave and see it with my own eyes for the first time.

None of the pictures I had seen could create the magic I felt when I stood inside the cave and looked at the temple and felt the peaceful atmosphere in the cave.

I completely forgot how exhausted I was after the long and hard trek up the mountain to the cave.
“WOW, what a beautiful sight”

-was the only thing on my mind when I for a long time was standing in total awe, looking at the beauty opening up before my eyes.

The cave consists of several large chambers, in one of them there is a small beautiful temple, where sunlight is shining down at it from a hole in the top of the cave.

I was driving south from Bangkok after have been driving about 300 Kilometers I came to Khao Sam Roi Yot National Park with is where Phraya Nakhon Cave is located.

I knew from Google maps that the cave closed at 3:30 pm and it was already close to 3 pm so if I wanted to visit the cave I was in a hurry.

I figured that 30 minutes was enough time to visit the cave and take some pictures, but that was before I found out how far there was up to the cave from the parking lot.

After paying the entrance fee, of 200 THB you have to pay to enter Khao Sam Roi Yot National Park, I had 2 options.

The first option was to take a boat to Laem Sala Beach, that is where the trek up the mountain to the cave starts.

But I was told there were only 2 kilometers to Laem Sala Beach if I followed the footpath along the coast over the mountain, so I figured it would be faster to walk.

To get from Bang Po Beach to Laem Sala Beach, you have to follow a small narrow mountain path connecting the 2 beaches, that should not be a problem I thought.

But it turned out that I was a little wrong, in fact, I was very wrong.

The trail started as a so-so mountain trail with smooth semi slippery stones, it is not a trip I would recommend in rainy weather.

I started at a fast pace; I was a little busy after all. After the first 10 minutes of walking, I got the first great view of the trip, it was of Bang Po Beach seen from above, beautiful is the only way to describe it.

After a while uphill on the mountain path, it looks like I am reaching the top of the mountain, separating the two beaches.

There I met 2 other tourists who were on their way back from the cave, I asked then how far it was still to the cave, if I was halfway yet? It was starting to get a little hot.

They smiled and told me a little longer, and I would be halfway to the next beach, but from there, a much longer and harder trek awaited me to the cave.

I thanked them, smiled thankfully and hurried on, even though I was getting a little tired in the legs, I still had to hurry a bit, or so I thought at the time.

After about 20 minutes of fast trekking and several amazing views later, I arrive at Laem Sala Beach. There I was met by a sign saying, ” Your health is still strong.”

On Laem Sala Beach there are several restaurants, and there are also some cabins you can rent if you want to spend the night, but you have to make a reservation in advance.

After 5 minutes fast walk I came to where the final trek up the mountain to the cave starts.

It turned out that the track over the first mountain was a walk in the park compared to what was to come.

The path started by being difficult and it only got harder the further up I came of what turned out to be a 430m long steep trek up to an elevation of 130m where the entrance to the cave is.

Halfway up there is a viewpoint where you can sit and rest for a bit, but for me, there was only time to take a few pictures, even though I was getting more tired I still thought I was busy reaching the Phraya Nakhon Cave before closing time.

After enjoying the view for a little while i continued my climb to the cave, and it was now i started to feel how thirsty i was, but I had forgotten to bring water, the only liquid I had on me was a little bottle of mosquito oil.

Fortunately, the path lay shadowed as it winds up the mountainside through a tropical rainforest, but with shadow comes mosquitoes.

Although I had put on plenty of mosquito oil before I started, most of it was probably gone, at this point I was wet with sweat, so the little bottle of mosquito oil came in handy after all.

Finally, the path began to flatten out, I took it as a sign that I had reached the top and that there could not be far to the cave.

And rightly so, I came to the cave entrance soon after.

The last climb from Laem Sala Beach to the cave me about 20 minutes. The whole trek from the parking lot at Bang Po Beach to the entrance of Phraya Nakhon Cave had then taken me about 45 minutes.